Analyzing the Wired article on the Hugo awards, Part Three

Today let’s take a look at slant in the Wired article on the Hugo awards. In Part One, I used a word frequency analysis to show gender bias, and in Part Two, I challenged the claim that the Hugo awards are about identity politics.

Today I’ll look at the way the Wired article is slanted in favor of some sub-genres and against others. This is a common error: many readers and reviewers have an unconscious hierarchy, and if a work doesn’t match up to the expectations of a favored sub-genre, then they consider the work itself to be inferior. People often do this without even noticing sub-genres exist.

And the hierarchy? Going by what I’ve heard many people say, it starts off with hard sci fi, space opera, military sci fi, cyberpunk, and then everything else. I’ve often heard it said that you can’t write sci fi unless you get the science right.

I don’t give a crap about the hierarchy. Personally, I prefer science fantasy, contemporary and urban fantasy, time travel, and space opera — but I’ll read anything that strikes my fancy. I also understand that even if I don’t like a work, that doesn’t mean it isn’t good.

The Wired article does have an unacknowledged hierarchy. Most obviously, as I mentioned yesterday, it keeps forgetting the Hugo awards include fantasy. I’ll repeat the quote here:

[T]he balloting had become a referendum on the future of the genre. Would sci-fi focus, as it has for much of its history, largely on brave white male engineers with ray guns fighting either a) hideous aliens or b) hideous governments who don’t want them to mine asteroids in space? Or would it continue its embrace of a broader sci-fi: stories about non-traditionally gendered explorers and post-singularity, post-ethnic characters who are sometimes not men and often even have feelings?

Meanwhile, according to the article, the genre has Gods, and they are:

These are all highly influential authors from a certain era, often called “The Golden Age” of science fiction. Here’s a look at the sub-genres they wrote in:

According to the Wired article, those sub-genres represent the pinnacle of SF/F in the past. Which sub-genres might it propose for the present and the future?

Would sci-fi focus, as it has for much of its history, largely on brave white male engineers with ray guns fighting either a) hideous aliens or b) hideous governments who don’t want them to mine asteroids in space? Or would it continue its embrace of a broader sci-fi: stories about non-traditionally gendered explorers and post-singularity, post-ethnic characters who are sometimes not men and often even have feelings?

Does this “broader sci-fi” fit into any of the categories I listed earlier? No, it does not. Let’s add a new one: feminist sci fi. It’s not a sub-genre unto itself, though. It always intersects with another one. For example, I never sit down and say, “Okay! Today I’m going to write feminist sci fi!” No, I say, “Today I’m going to write about time travel and clones!” And it’s feminist because I have a feminist world view.

Feminist sci fi isn’t some upstart newcomer, by the way. The first feminist sci fi was Mary Shelley’s Frankenstein, published in 1818. It’s about creating human life outside  the womb, and it’s about prejudice and “othering.” Oh yeah, and that new life has feelings.

But from the start, Correia had some serious complaints. He felt that the Hugos had become overly dominated by what he and others call “Social Justice Warriors,” who value politics over plot development. Particular targets of Puppy derision include . . . Ann Leckie’s debut novel Ancillary Justice, whose protagonists do not see gender. Leckie conveys this by using female pronouns throughout.

Wow, an entire novel just about female pronouns, that values the politics of female pronouns over plot development? Actually, no. Ancillary Justice is an exploration of a far-future empire, following in the footsteps of Asimov’s Foundation series. And it’s about human-AI-machine hybrids. The genre here is not SJW politics but hard sci fi. The female pronouns? I’ve read so much feminist sci fi that I barely noticed them.

The article goes on to quote Sad Puppy leader Torgersen as saying:

The author doesn’t question the assertion that quality goes out the window. Nor does she counter a quote it gives from a Puppy supporter at Sasquan as saying some science fiction has a certain academic torpor and is self-indulgent and unreadable. That amounts to tacit approval of a Puppy view of literature.

To sum up, the hierarchy of genres in this article has hard sci fi at the top and feminist science fiction and literary fiction and fantasy at the bottom.

That’s quite a slant. 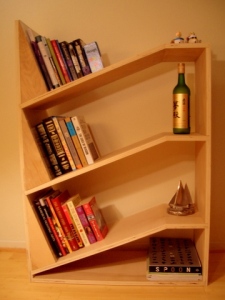 design by david ngo at http://www.ngocrump.com/

4 responses to “Analyzing the Wired article on the Hugo awards, Part Three”