Heads-up to anybody who lives in Seattle, might want to move here, might have kids, and/or might care about taxes ten years from now: there’s a train wreck coming. And that train wreck is school buildings. We don’t have enough of ’em. Nobody in a position of leadership in the schools or in the city is incorporating new development in its capacity planning. Seattle Public Schools hasn’t got plans in motion to purchase new buildings. The city doesn’t include funding for schools in development impact fees — those are fees that most cities have in place to ensure that when new homes are built, there will be schools for the kids to go to.

How do I know all this? I’ve been attending meetings on capacity shortages for years. I’ve seen the abysmal demographic reports the school district uses. Their projections always fall far short of enrollment. I’ve seen the game of musical chairs played with school boundaries, parents fighting tooth and nail over possession of school buildings, and portables, portables, portables.

So I’ve seen the start of the train wreck, but I’m willing to bet there’s worse to come.

That’s all for now.

At my kids’ school, the third through fifth grades have no playground equipment. How come? Seattle Public Schools tore it up and put a portable in its place, that’s how come. In theory, funds from Seattle Parks and Recreation, combined with funds from our PTA, will put in new equipment — but if the district adds another portable, all bets are off.

My kids used to get bus service to school, because their walking route includes crossing a dangerous state highway. Not any more. That’s been cut.

There’s a substitute shortage, meaning that some days kids show up to school and there is no teacher for them. Yes, really.

New housing is going up in my neighborhood, in preparation for light rail, but no new schools are being planned.

Our schools need funding so badly that the Washington State Supreme Court is currently holding the legislature in contempt of court and will consider sanctions if adequate funding does not arrive by the end of the 2015 session.

Meanwhile, though, the legislature is talking about suspending an initiative Washington State citizens recently passed to reduce class sizes. Why? They don’t want to do what it takes to fund it.

Oh yes, and the legislature has also given our schools an unfunded mandate to administer expensive, labor-intensive, and time-consuming tests.

What’s it going to take?  Seriously?

At a minimum, we need a reality check on the scope of the problem. Here are three charts from the website Network for Excellence in Washington Schools — the group that brought the lawsuit to the legislature and is monitoring and reporting on it.  They are from the group’s 2014 report to members. 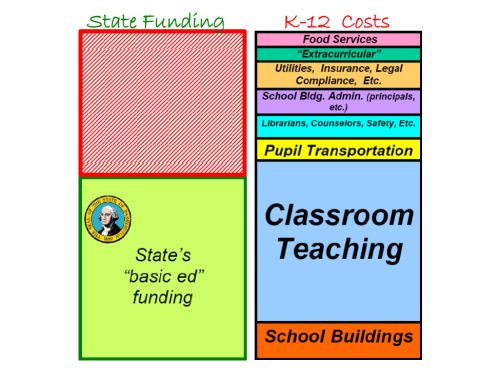 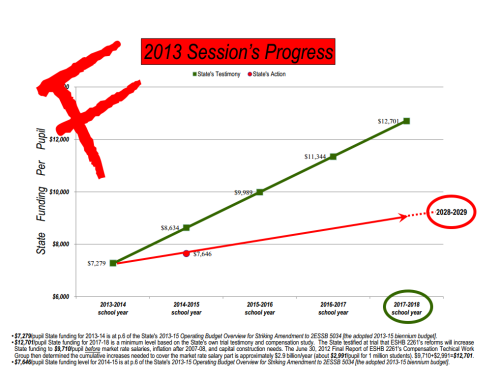 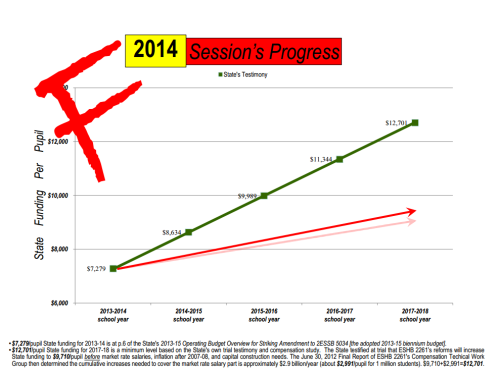 In my last post I looked at student growth percentiles, a new kind of data that the Washington State Office of Superintendent of Public Instruction. This post follows up by going into more detail about how SGPs are calculated. Back to the simple video with cartoon Anthony!

Cartoon Anthony got an MSP reading score of 344 in 3rd grade and a score of 381 in 4th grade. His score grew in that time. To get his SGP, they took the amount of growth and compared it to a group of 3rd grade students who began with that same score. His score of 381 was higher than 80% of the students in his comparison group, so he gets an SGP of 80. That shows “high growth.”

I’m going to set aside for the moment a couple of really large questions. First, exactly what does the MSP reading score measure? Second, what would have happened to the SGP if Cartoon Anthony was instead compared to a different set of students?

I’m just going to pretend those other questions don’t exist and ask, “How accurate is the SGP?” There are different ways to look at the answer to this question, but I’ll just give the easiest one here. Hang on to your hats, because I’m going to use just an eentsy weentsy bit of algebra. I’m going to use the variable x to indicate the absolute measurement error of a single MSP score. I’d use the real number, but I don’t know it and I couldn’t find it online anywhere.

The absolute measurement error for each test is x.

Using the simple method (that doesn’t rely on calculating standard deviations), the absolute measurement error for the change in scores is 2x.

So let’s suppose x is 10. That would make the absolute error 20, which means the change in scores could be anything from 17 to 47. Pretty big difference there!

If the measurement error is high enough, it makes Anthony’s SGP meaningless.

Is it meaningless? I don’t know. But the question needs asking.

Student Growth is WHAT?

What are they talking about? Height? Weight? No. “Academic growth.”

Well, then you have to ask, “What kind of academic growth? Measured how? And how accurately?”

You’ll find answers to the first two questions, but not the third.

They’re defining “academic growth” as a change in test scores on the state tests. They’re measuring it by a rather complex, involved process. It’s worth looking under the hood here. Maybe we need to go find a mechanic to ask whether it’s a working machine or a convoluted Rube Goldberg device with a fault in the middle? Maybe we need a crash course in statistics. Or a friend who understands this stuff.

Rather than trying to explain their Rube Goldberg device, the OSPI gives us a video with a fairly simple explanation. Too simple, really. They take a cute cartoon kid, Anthony, and show us that last year his 3rd grade MSP reading assessment score was 344, and that this year his 4th grade score 381. But is that amount of growth more, less, or the same as his peers? To answer that question, they take a bunch of kids who had the same 3rd grade score and compare the growth. Turns out that although Anthony is still behind, he had more academic growth than his peers.

Fairy dust. Did he really have more academic growth? Or did he maybe forget to eat breakfast in the third grade, making that score unusually low? That would compare him with a whole different set of academic peers. The problem here is that the OSPI is pretending that those two scores are accurate measures of how well Anthony can read. But they’re not. They’re both estimates.

Student Growth Percentiles are made by mashing up two estimates in really complicated ways. What is that, twice the inaccuracy? Or worse?

“Calculation of a student’s growth percentile is based upon the estimation of the conditional density associated with a student’s score at time t using the student’s prior scores at times 1, 2, . . . , t-1 as the conditioning variables.”

It is an estimate. How come the OSPI doesn’t say that on its website? Do they think we’re too stupid to understand? Or do they not understand?

Either way, it’s a bad sign. Because they’re going to be using the SGPs to evaluate teachers. Without looking under the hood. Teachers’ jobs will be on the line, so somebody has to look under the hood! Which means we have to learn some statistics. Oh dear!
Luckily, they have comic books for that nowadays. Here we go:

The Cartoon Guide to Statistics

This week we found out that the state had agreed to hand over all kinds of confidential data to our local newspaper, so they could get grant money from a nonprofit funded by our local billionaire to help further his political goals. I wrote about some of the ramifications on the Aqueduct Press blog.

Racial segregation of schools in the 21st century

Seattle Public Schools is rezoning right now, to meet capacity shortages that were caused by their decision several years back to close a bunch of schools. The closures occurred largely in the south part of Seattle, which is the most racially diverse area. There were closures in the north part of Seattle too. The school that our kids now attend was slated for closure. The community fought back and won, and two years later it was completely overcrowded. So the closures made no sense.

Something else happened as a result of the closures. When capacity shortages started to happen, the Summit K-8 program at the Jane Addams site was closed down, and about half of the students, who bussed in from South Seattle by choice, were sent back to South Seattle. What could the district do? There really were not enough seats to go around, and the Jane Addams site was being underutilized. And the choice to close schools in the north, while a mistake, was in the past.

That’s how racial segregation of schools is working in the 21st century.

Now the school district is rezoning to meet capacity needs. Some neighborhoods were once assigned to schools within walking distance. (It’s actually called a “walk zone” because Seattle has quite a few geographical barriers to walking to school, such as hills and freeways.) But this isn’t happening equitably. The district, which is probably shorthanded because of budget cuts, drew preliminary boundaries and then requested community feedback. Now, mysteriously, it appears that more diverse neighborhoods are losing access to nearby schools than less diverse neighborhoods are.

Why? How could this happen?

Let me back up and explain why I even know about this. In Seattle we have a community blog called Save Seattle Schools. I think it started back when the original school closures did. Bloggers Melissa Westbrook and Charlie Mas report and comment on district goings-on. And they provide a forum for parents all over the city to share information and perspectives.

IMO, they’re among the best investigative journalism around schools in Seattle.

Anyway, they posted open threads for parents in the different areas of Seattle to comment on these boundary changes. The thread for Southeast Seattle has a blogger, JvA, with a theory about why this has happened. Here’s what her neighborhood looks like:

Mid Beacon Hill is far more mixed, with white, Chinese, Filipino, and Vietnamese each only comprising 17-26% of the population. There is no racial or linguistic majority at all. The majority of residents speak a language other than English.

As far as I can tell, the district didn’t consider any such cultural or linguistic factors when assessing the input. I mean, it’s obvious white / US born / English speaking populations speak up more often than other populations, right? It’s obvious this is a farce, right?

She’s not even sure that the non-English speakers were notified:

Has the district even translated any of the materials about these radical changes to Beacon Hill, let alone tried to distribute them? My daughter goes to Maple, so I know for a fact that there have been no handouts in her backpack about it. Is it up to me to try to explain to all the folks on my block (Tagalog, Japanese, Mandarin, Vietnamese, Eritrean…) what is going on?

This is how racial segregation of schools happens in the 21st century.

And this isn’t just about that one neighborhood. No, there’s a pattern:

–Under the new proposal, 67% of Beacon Hill schools would lose walk zones, compared to 13% for the rest of the city.

–All of the Beacon Hill schools losing walk zones are Title 1 (low-income) schools.

Poverty and racial inequity. What a winning combination.

There’s just one thing in her comments I disagree with:

I know it’s not very Seattle to talk about racial / cultural inequity . . .

Plenty and plenty of people in Seattle care about this. Plenty don’t, of course. I do.

What’s going to happen with this small neighborhood? Stay posted by watching JvA’s blog, at: