Doctor Who Series 9 so far, with spoilers!

(Just skip this post if you haven’t watched “The Magician’s Apprentice” and “The Witch’s Familiar.”)

The first two episodes of series 9 were among the best Doctor Who so far, but they weren’t my favorite — and for the same reason! They delved deep into some seriously heavy topics. In general, I love that (see my article “Fall of a Superhero: Doctor Who and the Waters of Mars” that appeared in Strange Horizons). But it’s been happening so much I’m looking forward to a bit more light and fluffy.

And it’s funny to hear myself say that, because these first two episodes had amazing comedy. Michelle Gomez, playing the villainous Missy, stole the show. She’s an unapologetic, flamboyant murderer. She and Jenna Coleman, playing the Doctor’s companion Clara, passed the Bechdel test, then chopped it up into tiny pieces and had it for tea.  (BTW, there is some lovely commentary on how the Missy/Clara dynamic outshone the  Doctor/Davros dynamic in the Verity Podcast episode “Trials of the Witch’s Familiar.“)

Behind the comedy, though, is some heavy material on morality. There’s a time travel trope of “What if you could go back in time and kill Hitler as a boy/as a baby?” It’s been done to death. But there’s a twist. What if you wander about in time and one day, in the middle of saving an innocent boy’s life, you discover he’s Hitler? (Davros, in this case.)

What do you do?

Reader, I warned you about spoilers, but I will try to go easy on them, and not tell what the Doctor does. But whatever it is, it lands him in such trouble that his (second-worst) arch-enemy (slash best friend) has to come save him. This leads to a complicated examination of friends, enemies, the enemy inside the friend, and the friend inside the enemy.

It culminates with a truly horrifying scene. The Doctor’s companion, Clara, is trapped inside the shell of a Dalek. Roughly speaking, a Dalek is comprised of two parts: a mush of tentacles genetically modified to be without empathy, and a deadly traveling machine. Daleks have been scaring Doctor Who viewers since 1963. They’re unquestionably evil — bound and determined to exterminate every other race in the universe.

But when Clara gets trapped inside a Dalek, she learns something new. When she speaks inside the Dalek, the machine part rasps out a bad translation. So if she says, “I am your friend,” anybody standing in front of the Dalek would instead hear, “I am your enemy.” If she gets upset and says something, the machine starts saying “Exterminate!” and shooting.

So of course she ends up in a confrontation with the Doctor. And it’s horrifying to watch, especially since we’ve been told that Jenna Coleman will be leaving the show during this season. Trapped inside a traveling weapon . . . not a good way to go.

Luckily, the Doctor figures it out and rescues her.

Only there’s a more lasting horror. I’m not sure everyone caught it. What if, all along, throughout the history of the Daleks, there have been good Daleks imprisoned their whole lives inside a metal machine? What if they come up against the Doctor, a man sworn to save people, with a gesture of peace, only to be killed horribly?

Only they’re unquestionably evil, right? That’s been show canon ever since the episode “Genesis of the Daleks” in 1975.

Well . . . no. As it turns out, when the Doctor saves the young boy Davros, he deliberately introduces the concept of mercy to Davros. So there could indeed be dissenting Daleks, forever trapped in a fascist empire . . . shudder.

By chance, I ran into Richard Wright’s novel Black Boy at the library and started reading it like a woman possessed. In that novel, there is a stark and horrifying contrast between the inner life of an ordinary young boy and the “black devil” as he is seen by others. Words that he speaks in innocence are misheard. So now I’m thinking about Daleks, and I’m thinking about race. What if, no matter what you say or do, others will only see a violent and murderous enemy?

So that’s why I say these two episodes are among the best, but also my least favorite. I’m looking forward to something with a bit less horror!

Last week’s episode “Under the Lake” turned out more of an adventure. Scary ghosts, an underwater base that’s turning the lights off randomly, a puzzle to solve, and lots of running around. Pure fun so far, but is something deeper lurking in the shadows? We’ll find out next time, in “Before the Flood.” 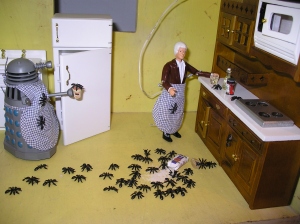 The enemy inside the friend?

This entry was posted in doctor who. Bookmark the permalink.