Update #3 to the Feminist Take on Clara Oswald

A couple years back, I started a series of “feminist takes” on Doctor Who companions, including Amy Pond, River Song, and Clara Oswald. I looked at ways they were, or were not, poster children for feminism.

But after three posts on Clara Oswald, I just plain gave up. She was such a squirrelly character that I couldn’t say anything definitive about her. As far as I’m concerned, she breaks feminist analysis. Maybe it’s a mistake to give characters “poster child” awards.

Here’s a recap of my commentary from Season 7. In the first post, I suggested that the character of Clara was suffering from a Bechdel test failure, but that even so, she was pretty amazing — in face, a mirror of the Doctor.

In my next post, I looked at the interactions between Clara and the TARDIS, arguing that it passed the Bechdel test and helped explore her character. But I also felt she was too perfect and not recognizably human. (I wonder if that’s why some fans have had strong negative reactions to her: maybe she’s an uncanny valley character.)

In the last post, I admitted defeat. I thought Modern Clara was a cardboard cutout of a person, but when you combined her with Dalek Clara and Victorian Clara, you got a rich characterization. But I decided to hold my opinions for later.

I didn’t put a post together after the stunning reveal of “Day of the Doctor.” To be honest, I didn’t know what to say. It was just beautiful and strange and blew my mind.

After “Day of the Doctor,” I believed everything Clara said and did. Dalek Clara and Victorian Clara suddenly made sense. Modern Clara did not. Modern Clara was acting like the post-transformation Clara. That’s going to bother me every time I watch Series 7. But it’s a critique of the narrative, not of the feminism. So I didn’t make an update.

Clara was amazing through most of Series 8. She was part human, with all the frailties and strengths a woman would have. But her character was also merging with the Doctor’s. I loved that. As a Doctor Who fan, part of me has always wanted to run off with him in the TARDIS and be his “Doctor Who Girl” (nod to Mitch Benn). And part of me has always wanted to be him. So I got to live vicariously. The episode “Flatline,” where she gets to play the part of the Doctor while he’s stuck inside her Mary Poppins carpetbag, was funny and amazing and thought-provoking too. Loved it.

Also fabulous: Series 8 Clara is transformed. She’s jumped into the Doctor’s – what? Mind? Time stream? She’s been thousands of people who were just as amazing as Dalek Clara and Victorian Clara. After that transformation, I believed every “too good to be true” moment.

Not so great: the narrative didn’t respect her transformation. She got this weird plotline in which she was trying to have a normal life with this Danny Pink character, but she kept lying to him, and she was blamed for all the lies. The Verity podcasters suggested it was an addiction storyline, which I guess it was. But why? Why expect that it would ever be possible for post-transformation Clara to live a normal life? The disconnect jarred me. But once again, it’s a critique of the narrative, not the feminism.

Now here we are in Series 9. This is the “Clara is going to die” series. Also the “Oh, and then she didn’t” series. But in “Face the Raven,” she really did. Except the actress is going to appear in the series finale, “Hell Bent.” How-what-who-I-don’t-even-know-what’s-going-on.

So I have nothing to say, really. I’m on a roller coaster and it’s about to plunge into the depths of the unknown. Maybe when the ride stops, I’ll have something sufficiently feministy to say. 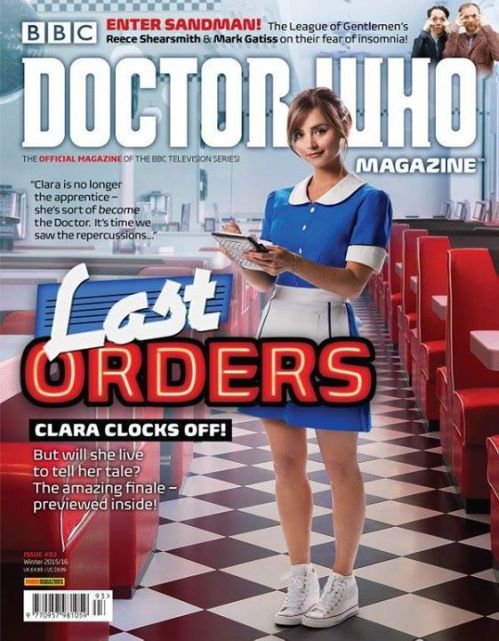 This entry was posted in books, movies, tv, music, doctor who and tagged clara oswald, doctor who, feminist who. Bookmark the permalink.