Yesterday I came across a simple, effective lesson on privilege that missed out on something important. It came from a comic by Nathan Pyle, posted first on BuzzFeed and then on the Everyday Feminism site: “How One Teacher Taught the Class a Powerful Lesson about Privilege.”

The teacher instructed students to crumple up pieces of paper and toss them in a recycling bin. Students in the front row had it easy, but oddly enough, students in the back row had it much harder. So far so good. But. The moral at the end.

Your job — as students who are receiving an education — is to be aware of your privilege. And use this particular privilege called “education” to do your best to achieve great things, all the while advocating for those in the rows behind you.

What’s wrong here? In short, it’s all about preserving privilege and power. It’s assuming an audience of privileged people and presenting them with a recommended course of action–all the while ignoring the folks in the back, and with them, any possible chance of doing away with privilege altogether.

Rather than argue my points, let’s play with a couple of different scenarios and see what happens. We’ll name the students in the front row A and B; the second row C and D; and the third row E and F.

Scenario #1: Bow to the Teacher’s Wisdom

All the students throw their crumpled papers. A and B succeed, and consider it a job well done. The second row students try diligently. C barely makes it, while D misses, resolving to try better next time. E and F aren’t even close. They complain bitterly and start arguing with the rest of the class.

“Well, I didn’t make it either, and you don’t hear me complaining,” replies D.

The teacher imparts his wisdom and most of the students nod thoughtfully,  imagining themselves in the front row of life and resolving to be kind to those less fortunate. But the back row students feel something’s off.

After the bell rings, E complains to F: “You mean to say the best I can hope for is to throw my paper, fail, and get a pat on the head from B?”

(Later that evening, the janitor comes in and cleans up the crumpled papers, feeling mild irritation at these careless, privileged students.)

In the middle of the teacher’s speechifying, E breaks out and says, “That was not fair! I demand a redo!”

“What’s your problem?” asks A.

In the second row, C turns around and says, “You sat in the back row. You don’t deserve to score. But I tried.”

E and F start crumpling fresh pieces of paper and get out of their seats for an impromptu redo.

“Sit down, students!” calls the teacher. “I wasn’t done explaining!”

E and F keep moving forward.  Afraid of violence, D asks everybody to quiet down and listen to the teacher. Meanwhile, A, B, and C have gotten out of their seats and formed a protective wall in front of the recycling bin.

A and F start yelling at each other. D starts shouting that it’s just a game. E pushes a chair up to the blockade and starts to climb up, B kicks it away, and A brandishes a ruler. D knocks over a desk. By the time the bell rings, the classroom is trashed and two kids are in detention.

(And the janitor is not pleased.)

Scenario #3: Somebody Uses their Imagination

Before any crumpled papers are thrown, F blows a whistle and says, “This is completely unfair!”

“You people are so sensitive,” says D.

The teacher tries to break in. “Students, this is a lesson about privilege. And your job, as students receiving an education, is to be aware of your privilege, and to advocate for others who are less fortunate.”

F blows the whistle again. “I vote we put the recycling bin in the back of the room. All in favor?” E shouts “Right on!” But C and D just look confused.

“This is a classroom, you moron, not a presidential election,” says A.

But C’s eyes light up. “Let’s put it in the exact middle.”

“Why do you care?” asks C. “It’s no farther away from you than it is now. You have the same chance of success.”

“Because it’s not FAIR to ME,” says A, with an eyeroll. B snickers and nods.

The teacher scolds A and B, saying, “Remember your privilege, and to advocate for those more fortunate.”

B looks a little abashed. “How about we give them more practice time?”

“Sorry, but no,” says the teacher. “Moving furniture is not allowed for this exercise.”

All eyes turn to the teacher.

The teacher makes eye contact with A and B and rolls his eyes conspiratorially. “That’s enough for today, students.”

F blows the whistle again. “All in favor of moving the chairs?”

The vote is not even close. The teacher vetoes, and A and B refuse to participate in the vote on the grounds that voting in a classroom is ridiculous. But the second and third rows are unanimous.  Chairs are moved. The game is played. Everybody wins.

(And the janitor has nothing to clean and goes home early.)

The Moral of the Story

It’s all well and good for the front-row students to understand their own privilege. But what then? What is to be done with that information, and who is capable of doing it?

(Aside from offering those questions, I have no Official Wisdom to impart. Make your own moral.) 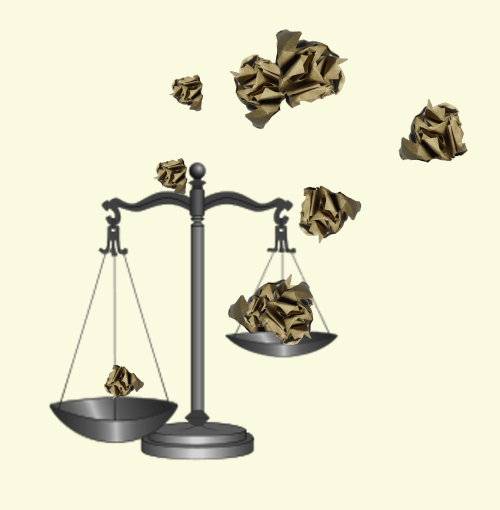 This entry was posted in language has power and tagged privilege. Bookmark the permalink.