My path to getting woke, part two

At the end of Monday’s post on getting woke, I promised to write about Professor Colleen McElroy and what she taught me while I was in the creative writing graduate program at the University of Washington. I regret to say I am skipping over my entire undergraduate education, largely for lack of time.

She was an amazing professor with a vast quantity of fascinating stories, which she always told with a conspiratorial twinkle in her eye. For a small taste of her life and her personality, here is an article by Bethany Reid on HistoryLink and an interview by Elizabeth Hoover in the magazine Sampsonia Way. I enjoyed her classes a lot but was fairly silent in her classes, partly because I was shy then and partly because of the awkwardness that comes from systemic racism. Now if you’re a person of color reading what I’m about to say, you might be surprised, and if you’re white you might think, “Oh yes, I know what you mean,” but anyhow, for the longest time, for many years, or rather several decades, I had the mistaken assumption that the internalized racial prejudice that I held — that everyone holds, to one extent or another — would be revealed to all the world if I spoke up and said the wrong thing. This has stopped me from speaking up about race, many times, when I should have.

Where I was most mistaken was in thinking that my internal racial prejudice was unique to me, or that most other white people would care about it one way or another. But even more so was my naive assumption that because the civil rights movement had happened, segregation theoretically ended, and so forth, that if a person held back from making some racist comment it was because they were ashamed of it, like I was. It’s clear now, from the enormous backlash against “political correctness,” that a whole lot of white people were silent only because of social conventions.

Colleen McElroy exposed me to a wide swath of voices I would never have heard otherwise. To name a few: bell hooks, Gloria Anzaldua, Isabel Allende, and Carolyn Forché. These voices framed my understanding of concepts such as the politics of art, race, and immigration; and they also provided a launching off point for learning more and more and more.

One of the books she taught was: 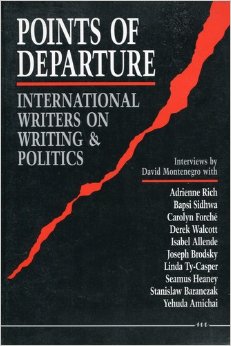 From the cover blurb:

In these times of political transformation and turmoil around the globe, Points of Departure offers incisive and passionate reflections on literature and politics by ten of the world’s leading writers. David Montenegro’s interviews with these novelists and poets, some living in exile, focus on the relationship of the writer’s work to political violence and oppression and examine the troubling tensions between art and social responsibility.

There’s an ongoing debate about “whether or not art should be political” and I have to say, after reading this book, I look at people who believe you can separate the two and wonder: What world are you living in?

The texts here put me on the path to getting “woke” not exclusively about racism but also about the lived experiences of people who have endured imperialism, colonialism, and so forth. And the understanding that many terrible realities have been too often whitewashed in our history and our news. This is of course still going on.

Below are quotations from two texts that provided a-ha moments for me, one by Isabel Allende and one by Carolyn Forché. I will leave them as is without discussion or interpretation.

From David Montenegro’s interview of Isabel Allende about the day of the military coup in Chile, in which her uncle, Senator Allende, was deposed and killed, here are some snippets.

Well, I was a journalist at that time, and that day I got up very early in the morning, as I usually do. I prepared my children for school, like any day, and went to my office. I didn’t realize there was a coup. . . .

By two o’clock, more or less, I learned that Allende was dead and that many of my friends were in hiding; others were killed; others were in prison. But at that moment it was very difficult to realize exactly what was happening. It was a time of great confusion. And rumors. On television we only had military marches and Walt Disney movies. It was so surrealistic, so strange. . . .

[T]he very day of the coup, soldiers would cut the pants of women in the streets with scissors because they wanted ladies to wear skirts, which was proper. . . .

And here is a bit from Carolyn Forché prose poem “The Colonel,” which details a poet’s interview with a colonel. It begins in mundane domesticity, with the wife bringing coffee and sugar and the daughter filing her nails. Midway through the interview:

The colonel returned with a sack used to bring groceries home. He spilled many human ears on the table. They were like dried peach halves. There is no other way to say this. . . .

Opening my eyes to the world in this way was not the most pleasant gift I have ever received, but is certainly one of the most important. Thank you, Professor Colleen McElroy.